Matt Cosinuke was hired as the head coach of the Eastern Kentucky University soccer program on January 3, 2019.

Cosinuke comes to EKU following five successful seasons as an assistant coach / recruiting coordinator at the University of Cincinnati (2014 to 2018). He helped lead the Bearcats to the 2015 American Athletic Conference (AAC) Tournament championship and a trip to the 2015 NCAA Tournament.

“I’d like to thank Stephen Lochmueller, James Downer and Rachel Park for believing in me to lead this program,” Cosinuke said. “I’d also like to especially thank Neil Stafford for helping to shape me into the coach I am today. Richmond is a wonderful town and EKU is an exceptional university. I feel blessed to be given this opportunity, and I look forward to the challenge. My wife Alexis, my daughter, Iris, and I are ready to be part of the community and extended EKU Family. Go Big E!”

During Cosinuke’s five seasons at Cincinnati, the Bearcats’ RPI rose from No. 237 to No. 11.

Cincinnati notably finished the 2015 season with a record of 13-6-5 (5-3-1 AAC), giving the Bearcats their best league finish since 2002. UC then stormed through the AAC Tournament and stunned USF in a penalty-kick shootout in the title game to win its first ever conference championship and earn its first NCAA bid since 2010.

In addition to his duties as recruiting coordinator, Cosinuke worked primarily with UC’s goalkeepers and defenders. During the championship season of 2015, the Bearcat defense recorded 12 shutouts, second-most in a season in the history of the American Athletic Conference. In 2017, UC notched 11 clean sheets, third most in conference history.

In 2017, UC keeper Natalie Smith led the AAC in shutouts during conference play (five) and ranked second in the league in goals-against average (0.82).

“We are thrilled to welcome Matt, Alexis and Iris to the EKU family,” Lochmueller said. “Matt brings a unique energy and passion to coaching that I think will spill over to our players and fans. He also played Division-I soccer, so he knows first-hand the preparation and hard-work that goes into competing on the highest collegiate level. Finally, Matt has extensive recruiting connections in this region, which will only bolster our strong soccer program.”

Prior to joining the women’s soccer coaching staff at Cincinnati, Cosinuke was a volunteer goalkeepers coach for the UC men’s soccer program from 2012 to 2013. During that time, he instructed a goalkeeper who led the Big East in shutouts and ranked 21st in the country in saves.

Cosinuke experienced great success as a volunteer goalkeepers coach for the Dartmouth College men’s soccer program from 2010 to 2012. During the 2010 season, the Big Green reached the NCAA Sweet 16 before falling to No. 8 UCLA, 2-1, in double overtime. In 2011, Cosinuke helped lead Dartmouth to the Ivy League title and back to the NCAA Tournament. He mentored goalkeeper Noah Cohen to honorable mention All-Ivy League honors in 2011.

Before arriving at Dartmouth, Cosinuke spent one season as a volunteer goalkeepers coach at his alma mater, Florida Atlantic University, in 2009.

A native of Lebanon, New Hampshire, Cosinuke graduated from Kimball Union Academy in Meriden, New Hampshire before going on to play Division-I soccer at FAU.

Cosinuke holds an Advanced National Goalkeeping License from the National Soccer Coaches Association of America and several licenses from the U.S. Soccer Federation.

He graduated from FAU with a bachelor’s degree in psychology. He also holds a master’s degree in sport management (certificate in athletic administration) from the University of Southern New Hampshire.

Cosinuke and his wife, Alexis, have one daughter, Iris.


What Others Are Saying About Matt Cosinuke …

“Matt Cosinuke is, first and foremost, a great person. He has impeccable character, cares for others, and places great emphasis on building positive relationships. Matt is passionate, positive, and has a magnetic personality. I was fortunate enough to work alongside Matt for over three years, and witnessed his work-ethic and willingness to grind first-hand.  He will provide an immediate infusion of energy into the program. I can’t overstate how excited I am for Matt, as he is fully deserving of this great opportunity. I firmly believe that EKU made a great hire!”
- Nate Lie, Head Coach, Xavier University

“Matt Cosinuke is a tremendous hire for EKU. Matt has an incredible work ethic and isn’t afraid to grind, and he is one of the hardest working coaches on the recruiting trail.  He knows how important it is to bring the right people, not just good players, into the program and he will work tirelessly to get the right people on board that will establish the foundation for a winning culture, both on and off the field. Matt has a very bright future ahead of him as a head coach, and EKU will experience a great deal of success and be a contender in the OVC under his watch. Matt and his family will be a great addition for EKU.”
- Stefanie Golan, Head Coach, University of Minnesota

“EKU made a fantastic hire in Matt Cosinuke. Matt is one of the bright young coaches out there in the college game today. Matt’s a player’s coach, talented, ambitious and hard working with a good knowledge of the game. Matt has a passion for people and I have no doubt that he will make all those around him better for it. The lessons the student-athletes will learn from Matt, on and off the field and in and out of the classroom, will be invaluable during their post-collegiate careers. I’m excited to watch and see the heights that Matt takes EKU.”
- Neil Stafford, Head Coach, University of Cincinnati 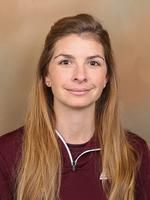 “We are very excited to have Kristen join our family,” head coach Matt Cosinuke said when she was hired. “Through this entire process, Kristen’s drive, work ethic and personality were exactly what we were looking for. She is an exceptional person with high character, and she will be an outstanding example for our women."

Washburn comes to EKU from the College of William & Mary, where she served as a volunteer assistant coach during the 2018 season.

Washburn was also an assistant coach at Virginia Military Institute (VMI) from 2013 to 2015, while serving as an ROTC instructor on campus. The Keydets recorded one of the best seasons in program history in 2015, winning six matches and advancing to the quarterfinals of the Southern Conference Tournament.

“I am very grateful for the opportunity to join Matt and the EKU soccer family,” Washburn said. “I knew this would be great fit the minute I walked on campus."

Prior to entering the coaching realm, Washburn was a standout player at the U.S. Naval Academy in Annapolis, Maryland from 2005 to 2009. She appeared in 65 matches with 18 starts, recording six goals, 11 assists and 23 points during her four-year career. Washburn helped the Mids to 60 wins, a pair of Patriot League Tournament titles, two Patriot League regular season championships and two berths in the NCAA Tournament. She also played one season for the Navy women’s lacrosse program.

Washburn served in the U.S. Navy from 2009 to 2018. She earned her degree in International Relations and Foreign Policy from the Naval Academy in 2009.  She is currently enrolled in a sports industry management master’s program at Georgetown University.